There will be celebrations today wherever the Irish are to be found and by those who wish to be. There will be whiskey and song, jokes and tales. Here in Durban, the Blarney Brothers will be in popular demand again tonight. "Their music is a mixture of Irish ballads, foot tapping pub songs, popular newies and the occasional Irish jig."  It is a jolly time.

For me St Patrick's Day isn't so much about shamrock, leprechauns and snakes. For me it is about what has come to be described as the "Celtic spirit" and that distinctive Celtic notion - "thin places". "Thin places are places where this world and the eternal world intertwine, are knitted together ... the two worlds touch. Thin Places - places where the veil between this world and the "Other" world is translucently thin - places where God is more near... mystical, cosmic, spiritual sites where heaven and earth mingle," says Mindie Burgoyne.

Thin Places are ports in the storm of life, where the pilgrims can move closer to the God they seek,  where one leaves that which is familiar and journeys into the Divine Presence.  They are stopping places where men and women are given pause to wonder about what lies beyond the mundane rituals, the grief, trials and boredom of our day-to-day life.  They probe to the core of the human heart and open the pathway that leads to satisfying the familiar hungers and yearnings common to all people on earth, the hunger to be connected, to be a part of something greater, to be loved, to find peace.    ~ Mindie Burgoyne, Walking Through Thin Places 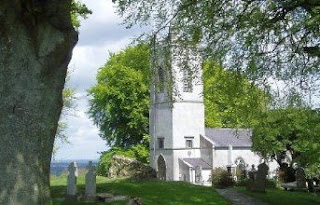 There are many such places in Ireland. Newgrange is one. The nearby Hill of Tara is another. Tara is richly endowed with myth, legend, history, political and mystical experience. Tara was in ancient times a major centre of Druidism. It is therefore significant that many of the stories and legends of St Patrick and his confrontation with the old religious and political powers during the 5th Century took place on this hill.

It was on his way to Tara that Patrick prayed:

That was the prayer that I echoed in the May of 2008 as I sat quietly in the shades of the little churchyard where St Patrick, like an Elijah of old, had challenged the oppressive religious powers and officialdom. This was the thin place to which I had brought my own personal storms of life and struggles, moved closer to God, and there became intertwined with the ancient myths and longings of the human spirit of countless ages past. God was in that place. The Standing Stone of Destiny on Tara Hill suddenly became to me a Touchstone to the Divine, a memorial reminder of another...

... green hill far away,
Without a city wall,
Where the dear Lord was crucified
Who died to save us all.
~ Cecil Frances Alexander

...and below the Standing Stone the Empty Grave Mound.